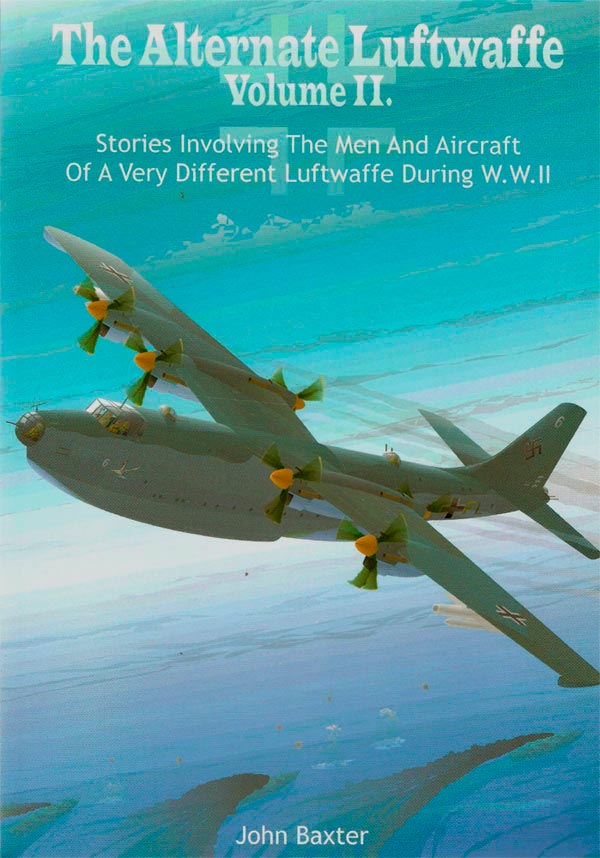 Got the book today, love the front cover. I collect information and some models on flying boats 1935 to 1950 so liked the front cover right away. I had a quick look through and photos are great, your models are excellent and will be reading it tonight.”
Alan Australia, October, 2005.

“I have enormously enjoyed reading "The Alternate Luftwaffe" volume II. It is not just about two of my favourite airplanes (Fw 187 and Ar 240) but it also gives a good scaring to Churchill and Roosevelt! I am happy that Lord Mountbatten did not suffer more that some scratches. I like him. But I do regret that Lord Halifax would not attend the conference (I think you should have gone for him too). The scale models are excellent, as usual. Your publications and style improve with every new book.
Justo Miranda, Spain, November 2005.

“I have just finished reading the Trägerflotten Data Book, I liked it very much! Now I started TAL II, it looks very promising too. The artwork of the Me-260 on the backcover is what I was asking for! I would like to see more quality drawings like that!
Guillermo Perez, Argentina, November, 2005.

“I read your book. Some really interesting ideas there. Using the Ar240 as an anti-shipping aircraft was a nice touch. I enjoyed the Falke stories as well. Even if the Falke did not replace the Me110, it deserved some service. I liked the Me264s bombing America. I almost felt sorry for the guys flying the Bf109X, having read Closterman's account about high altitude interceptions. It was certainly not much fun. Definitely not a game for the beginner.
Mark Lewis, Australia, November 2005.

“I have received the book, really nice work as you are used to!”
Stephane Campobello, France, December 2005

"We have very much enjoyed the previous volumes where the author imagines alternate scenarios of aerial warfare in WWII. The principle is simple : the author takes possession of a Luftwaffe prototype which has never been built, with corresponding technical datas. Once the machine is well defined, it is placed in a scenario where it faces the best Anglo-Saxon or Soviet adversaries. Albeit being not History, the reader passionates himself for these short chapters which are sounding like reality. Attacks on the big Allied bases like Alexandria or Scapa-Flow, ferocious dogfights for aerial supremacy over the German-occupied Azores, bombing of New-York or an issue of 'Der Adler' of 1946 where the General Galland relates his exploits in Me 262 ! Tons of pages for plane lovers and military history fans. French readers will discover that in these stories, whole squadrons of the Luftwaffe have... French pilots ! A rare book, for those who drink kerosene and high-octan fuel."
‘Aventures et dossiers secrets de L’Histoire numero 62’, France, February 2006.

“This is the second instalment from the author of a series of operations and incidents from World War II that may have happened had certain events and decisions, including Allied and Axis alliances, been different during the course of the war. It is not purely fantasy but an entirely plausible alternative utilising known aircraft types and designs that may have made it into mass production and ultimately operational service. All the aircraft are entirely possible given the standards of aerospace design at the time. For instance, what would have happened with British fighter production had the Spitfire production lines been bombed out of existence? Would the Merlin engines destined for these lines be redirected to a redesigned Westland Whirlwind as hypothesised by the author? Also, if Hitler had died earlier in the war, what would have happened with German aircraft design and production, in particular the Messerschmitt Me 262? Each chapter of the book outlines an incident or campaign in this alternative war, and as such, care has been taken in showing the background to these. Much thought has gone intro who is in command of the various units, what aircraft types are utilised and in what strength and where these units are deployed. I found the thought of the P-67 Moonbat and the Gotha 229 as contemporaries and night-fighters particularly intriguing. A historical footnote is added to the end of each chapter to enable the reader to compare the author’s stories with the currently known and established facts. A list of references is also included. The book also includes a selection of photos of complete models of the various aircraft types described plus many examples of artwork, simplified maps and imagery including some of these models. A colour centre section enhances this. A comprehensive list is also provided at the end of the book for available 1:72 scale kits of these aircraft. (I am personally hoping some manufacturer releases a Do 216!) In summing up, this is a thoroughly entertaining read and is to be recommended to anyone who ever had the thought (what if?) in regards to the air war in World War II.”
Daryl Williams, ModelArt Australia, February 2006.

Back to Aviation Books from Alternate Luftwaffe 2 book review