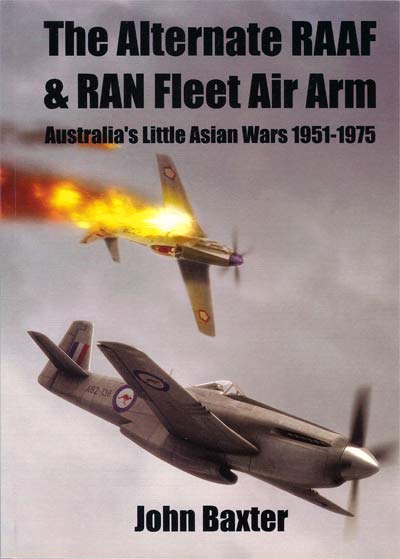 “I received ‘The Alternate RAAF and RAN Fleet Air Arm’ on Friday. An excellent read. You’ve managed to include all my favourite post 1945 aircraft from the Rotodyne to the Ajeet. I commend you on a great piece of work and my thanks to Lee Bagnall for his facilitation in the process.”
David Knight, Suffolk, United Kingdom, June 2003.

“I just bought your new book ‘The Alternate RAAF and RAN Fleet Air Arm’ on the weekend and I have to thank you for another great look at alternative history. I am a huge aircraft carrier fan, so to see the use of the Malta class carrier and the purchasing of 3 carriers from the USA was great. It was an excellent read. I could not put it down. I look forward to your next book.”
Cameron Blair, Melbourne, June 2003.

This is the latest title from John Baxter and follows a similar thread to the previous ones, although this time he gives his “what if?” twist to the RAAF and RAN operations in the 1951 to 1975 period. All of the text within this title is spurious to a lesser or greater degree and charts what may have happened in the listed period. All of the reported incidents are very well written and quite believable and the use of model photographs throughout along with a couple of cleverly modified genuine images make it a compelling read. This title has been set and produced by UK modeller and well-known ‘what if?’ fan Lee Bagnall (He of ‘Padded Cell’ fame) and much of Lee’s work is included. If you like a bit of therapy from your modelling and don’t mind running off the beaten track in what you make, then we can, as always recommend this new title from John. The quality of the production coupled with excellent and believable stories makes this a very readable book and who knows, it may inspire a few of you to make some of the aircraft depicted. I have to ask though, why does a TSR.2 look horrible in camouflage?
Scale Aviation Modeller International, August 2003.

This is probably about as niche as a publication gets, at least if its likely to be reviewed in these pages. Author John Baxter has already produced three volumes, one on the Alternate Luftwaffe and two on the German naval air arm that might have been during World War II; here he has turned his attention to his native Australia, and a quick look at the dedication will give you some idea at least of the reason why. The book’s subtitle is Australia’s Little Asian Wars, 1951-1975 and as before, he develops his historical scenarios from known starting points. However, some of these may be less well known in this hemisphere than they would be on the other side of the world. The main adversaries are Indonesia, unsurprisingly, and India, in a dispute over the Cocos Islands (maps, fortunately, are among the illustrations). Aircraft that feature in the campaigns are largely illustrated by models, and by side-view drawings of many of them in colour. Text covers pseudo-documentation of the time, and first-person accounts by some of the participants; tinted information panels distinguish between fact and fiction, and also identify the modellers. It will come as no surprise to find that one type that features heavily is the BAC TSR.2, known here by its RAAF sobriquet of ‘Boomer’. The Hawker P.1081, named ‘Falcon’ also has its place. But my favourite inclusion is probably the Rotodyne, not least in one episode as a RAN COD vehicle. Considerable attention is also paid to the fleets involved, with explanations both of the real ships and those which have been added (and why). At the end of the book there is a kitography compiled by Lee Bagnall, confined to 1:72 scale and suggesting availability. As always, this is a snapshot at a particular moment and I have reason to believe that there may well be additions available over the next twelve months. John writes entertainingly, and part of the enjoyment of reading this book for me has been in agreeing and sometimes disagreeing with his assumptions and conclusions. I am assured that a second Alternate Luftwaffe is in preparation – I wonder what John might have in mind for KG 200?
Mike McEvoy, Scale Aircraft Modelling, August 2003.

A small book, 245 mm high by 175 mm wide (so it’s bigger than A5, but smaller than A4) with 153 pages, this book follows in John Baxter’s already established practice of writing fictitious alternate aviation histories – in this case something that is very much an Australian story. It is also heavily graphical, with many colour and B&W photos of models, plus many line drawings and colour side views. To set the scene, Baxter details a possible path the RAAF and RAN may have taken starting from immediately after WWII, and stretching until the late sixties. He offers a few major deviations from the reality of actual post-WWII Australia, in an effort to explain why the story grants a massively more powerful Air Force and Fleet Air Arm than ever existed. He then goes on to relate in sometimes considerable detail two conflicts involving these “what might have been” Australian air arms: the first scenario involves a small war with Indonesia, the second a rather more involved conflict with India. In telling the story, Baxter relies heavily on various sources, which he quotes in reference lists at the end of each chapter. In this regard, the book reminds me very much of the book Project Cancelled by Derek Wood, and a short article that appeared in the RAF Year Book from 1976, called “Wings Clipped and Cancelled “ (also by Derek Wood). The book describes a series of hypothetical Australian service aircraft in detail, mixing fact and fiction to explain why they might have been adopted rather than the reality of the times. The text relies heavily on photos of models of some of these like the BAC TSR 2, the LTV Corsair II and Grumman Albatross. I found the whole concept of ‘what might have beens’ great fun, so overall I can certainly recommend the book. The digital cover art is fairly breathtaking (two RAAF CAC-15s downing an Indonesian F-51D), the models are nicely done and photographed, the simple line work of the drawings is good.
Lindsay Charman, Australian Plastic Modellers Association, Issue 3, September 2003.

The makeup of Australia’s military air arms has been the subject of much debate amongst the media and public alike for some time, and this new book from John Baxter hypothesises how this may have evolved had different decisions on equipment been taken by the relevant authorities at various points in time. This book describes in great detail unit strengths, aircraft types and the reasoning behind their acquisition. A great deal of effort has gone into describing the various military clashes involving Australia in an alternate time line. This is done from both eyewitness accounts and a general recounting of the hypothetical skirmishes in the region, and is written in a highly entertaining manner. At all time the writing is feasible, with all the aircraft, carriers and escort vessels described in the book being actual types or feasible developments. (No flights of fancy here!) At various points the author has added true historical footnotes to allow the reader to compare fact with fiction. The book includes colour profiles, illustrations of fleet movements and campaign areas, along with many photos of aircraft models in the markings of the various operational squadrons described. There is even a listing pf all the model kits available to build examples of the aircraft depicted. This is a difficult book to put down and is recommended to anyone with an interest in Australian military aviation as well s the obvious ‘wishful thinking’ brigade.
Daryl Williams, ModelArt Australia, Issue no. 15 September - October 2003.

“John, Just a quick note to thank you for signing my copy of your book. I spent most of last night reading it and it is outstanding.”
Phil Parkinson, Canberra, Australia, October 2003.

“I'm on page 91 of your book, and enjoying it immensely. I'm just disappointed that it is not several hundred pages long. This book is most pleasing to read. Thanks again for a wonderful "Alternate History", and please continue to keep up the good work.”
Bernie Sanz, California, October 2003.

"In this almost believable alternate history, Australia asserts her sovereignty against her neighbours using her force of TSR.2s, Rotodynes and CAC FB.31 Falcons (licence-built Hawker P.1081s, before you ask). The artwork provides a fascinating supply of subjects for modellers who have run out of less fictional ideas!”
Midland Counties Publications, catalogue 62, Autumn 2003.

“I purchased your book last week and was very impressed. I used to subscribe to ‘Padded Cell 46’ which carried your work and I enjoyed very much, but this is so much better. I have ordered an Airfix Rotodyne to make, either RAN or RAAF.
Frank Meechan, Glasgow, Scotland, January 2004.

“Thank you for the quick dispatch of ‘The Alternate RAAF’ book. I haven’t settled down to reading it yet but have examined all the pictures and skimmed the text. It’s a great book just on this cursory examination. I’m looking forward to getting my next book from you.”
Mark Gilligan, West Australia, January 2004.

“I picked up ‘The Alternate RAAF and RAN’ book last week-end and haven’t stopped reading it since. I am enjoying the stories.”
Nicholas Pedley, Essex, UK, February 2004.

I’ve just bought The Alternate RAAF, Luftwaffe and Tragerflotten. The alternative RAAF theme is very popular now. I’m thinking of building a Meteor Mk III, F-104 or even a Hunter in RAAF markings. All good fun and I think we have you to thank for it.
Phil Newman RAAF Base Richmond, NSW, April 2004.

Back to Aviation Books from The Alternative RAAF